Amethyst is an incredibly popular stone, most likely down to the fact that it is reasonably inexpensive, easy to obtain, and has many uses.


With its varying shades of purple, it is a pretty stone to look at, and is often used in jewelry. It has been used throughout history, and even has its own origin story connected with it!


According to the Ancient Greeks, Amethyst was in fact a young girl who became hounded by the God Bacchus, who was in love with her, after he consumed too much red wine. Young Amethyst cried out to to the Goddess Diana to help her, and Diana turned her into a white quartz. Realising what he had caused, and overcome with remorse, Bacchus cried, his tears dripping into his goblet of red wine. As he wept, the goblet fell, spilling red wine all of the white quartz, which turned it the familiar purple colour we see today.


Another version of the story describes how Dionysus, insulted by a mortal, swore to slay the next mortal to cross his path. This was the unfortunate young woman Amethyst who was on her way honour Artemis. It was Artemis who turned her into a quartz statue, at the sight of which Dionysus began to weep with remorse. It was his tears that then stained the statue purple.


This led the Greeks to drink from vessels made of amethyst, or wearing it whilst drinking, as it was believed it would protect them from intoxication.


In Christianity, Priests wear a ring with an amethyst stone, and it was said St. Valentine also wore a ring of purple amethyst. Medieval Europeans wore amethyst for protection, and Anglo-Saxon soldiers have been found buried with amethyst beads. It is the birthstone associated with February, and also a six year wedding anniversary. 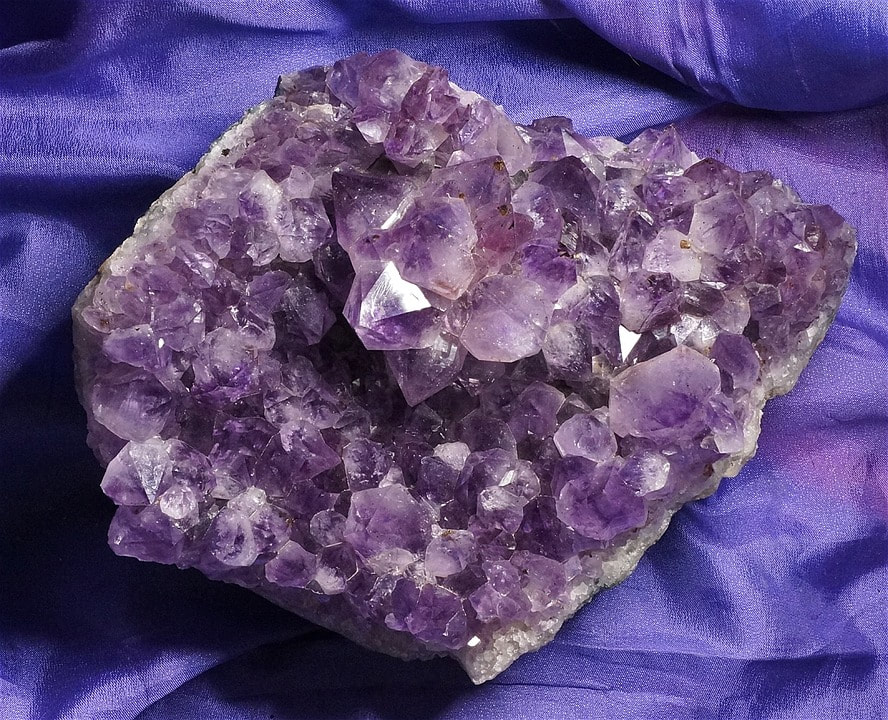 As mentioned,I have found that Amethyst has many uses:


Creativity: The darker amethysts especially are reputed to be beneficial for those who practice any creative arts; painters, poets, composers and artists alike can utilise its power, especially to conceive of new ideas.


Healer: Amethyst is a healer of almost all ills, and not just in people, but in plants and animals too. As a stone of balance, it can bring great inner peace. Physically, it is reputed to increase hormone production, oxygenate the blood, soothe headaches, help cure skin ailments, swelling and bruising, as well as arthritis.


Protection: Amethyst is especially skilled in being able to protect against negative energies by transforming those energies into positive and loving energies.


Calming: Another function which amethyst is well known for is its ability to soothe the mind, body and spirit. Whether you are suffering from anxiety, nerves, fear or doubt, amethyst will help you calm down and relax. It can also help to relieve tensions between those who may be arguing by helping you to let go of anger and defusing negative energies.


Aiding in Sleep: Due to its relaxing nature, amethyst supports those who are having trouble sleeping. It is recommend to place a piece under your pillow, especially if you are suffering from bad dreams. I have always found that I have pleasent and vivid dreams when sleeping with amethyst under my pillow, and wake up feeling refreshed.


Diplomacy and Negotiating: Amethysts soothing qualities also make it an excellent choice for those who need to negotiate or practice diplomacy, whether that's at work, or in your personal life. It can quell angry temperaments, and encourage intellectual thinking which can be useful in debates.


Curbing Bad Habits: As a stone of balance, it can help us fight the urge to over-indulge, and can be useful to those who are wanting to give up on bad or addictive habits.


Psychic Abilities: With its purple colour, amethyst is associated with the third eye chakra, intuition, and increasing our psychic abilities.


Dealing with Grief: As amethyst is a soothing stone which encourages us to look into ourselves, it is a great stone for those who are trying to get over the loss of someone close to them, or maybe even someone who is coming to terms with death themselves. It encourages the release of sorrow, and helping us feel at peace with ourselves and our emotions


Connecting with Your Spirituality: All in all, amethyst is a great stone for spiritual explorers, and is often used in meditation to help people connect with their higher selves.

Amethyst is a great crystal for those who are new to crystal work or magick, as it is an easy, all-purpose stone, a staple of many witches collection. If you are looking for a one-stone-does-all, the amethyst should be your first go-to.