The moon is an important entity in witchcraft, for she represents the Goddess, and is the ultimate feminine symbol. In some cultures, such ancient Japanese mythology, the moon is actually associated with a God as opposed to a Goddess. However, in many modern pagan traditions, it is predominantly feminine. One ‘theory’ for this having evolved as being the case in many cultures is that the menstrual cycle roughly lines up with the lunar cycles.


In ancient cultures, the moon was just one of the ways in which people measured the best time to plant and harvest their crops. It also acted as a way for people to navigate their way across the land and seas.


The fact that it is used to help determine when best to plant and harvest crops has leant associations of fertility to the moon. The association with the menstrual cycle has helped cement it as a feminine based energy. The moon is also partially responsible for the tides of the world's oceans and seas, causing high and low tides; as such, the moon is strongly associated with water.


Taking into account the above, as well as the general new moon - full moon - new moon cycle, we can see how the moon has become a symbol of the ‘tides’ of life, the cycle of life, death and rebirth.


By its very nature and its feminine and water element attribution, the moon also symbolises our emotions, our intuition and subconscious, and divination. 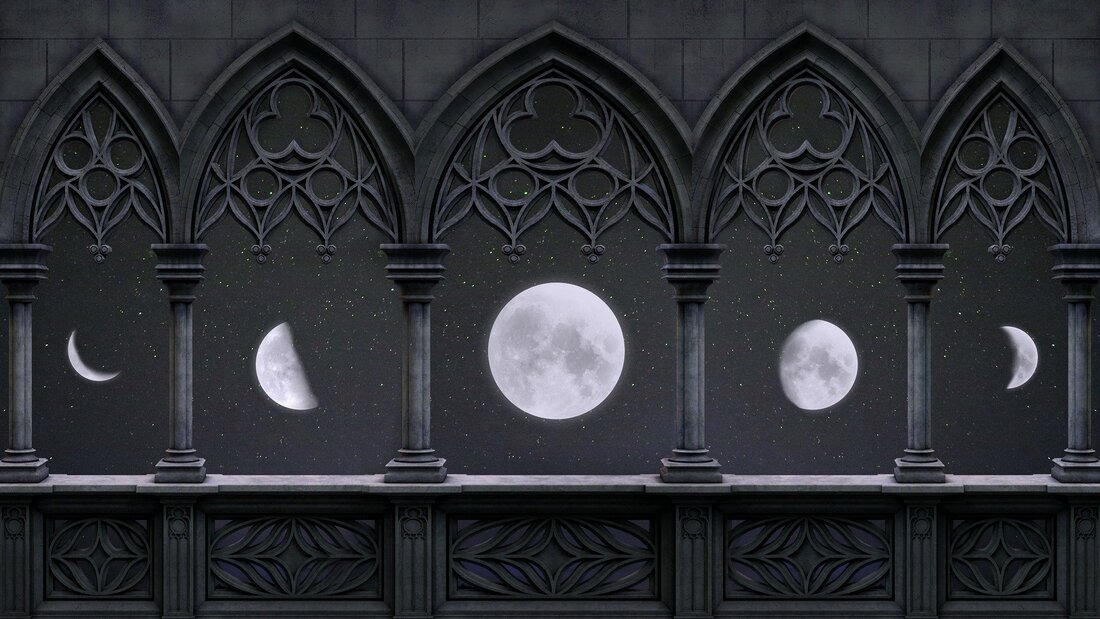 One quick and easy way to utilise lunar energies is to create moon water. This is water which has been left in the direct light of the full moon to absorb its energies. It is best to use a glass jar which has been thoroughly cleaned, and with a lid, left out overnight where you know it will catch at least some of the moon's rays.
Moon water has many uses. You can use it in your rituals or spells, to water plants to give them a boost, you can drink it, use it to clean - the possibilities are endless.

Below are some of the more well-known moon deities you may want to research if you are interested in working with specific moon deities. Or, you can just use ‘Goddess’ when working with lunar deities. Especially if you believe that all deities are just faces of one, overall universal energy (like the many faces of a diamond), then this is a just as powerful an approach. Most of the info below I have got from the following website: https://www.goddess-guide.com/moon-goddess.html - take a look for even more deities:


Selene: Greek Goddess of the moon. Dresses in silver, white and blue robes, and wears a crescent moon crown. Rides her chariot of horses which pulls the moon across the sky


Arianrhod: Celtic Goddess of the moon and stars, her name means "silver- wheel"


Artemis: A Greek Goddess of the hunt, nature and birth, she is symbolized by the crescent moon


Cerridwen: A Celtic Crone Goddess famous for her cauldron of wisdom; often associated with the waning and dark moon


Hekate: A Greek A crone Moon Goddess, deeply associated with the waning and dark moon


Ishtar: A Babylonian Goddess of the Moon. Some myths say she is the daughter of the moon, others the mother


Isis: An Egyptian Goddess who was not only a moon deity, but a Goddess of the sun as well


The mother is associated with the full moon. It is she who gives birth to the abundance of the Earth. Her qualities are that of nurturing, maturity, and protection. She has experienced the world and the fullness of life, and is sure of herself, and selfless in her actions. She is associated with noon, the season of summer, forests and fields and all that grows and blooms.


The crone is associated with the waning and the dark moon. Often feared, she is depicted as an old woman with grey hair. She represents wisdom, and governs aging, endings, death and rebirth, past lives, transformations, visions, prophecy and guidance. Her seasons are autumn and winter, her time is the darkened night.


You can call on these influences to help with your magick and your own spiritual growth. You can just use them by calling on the ‘maiden’, ‘mother’ or the ‘crone’, or you can work with one of the well established trinities, or you can come up with your own trinity; just remember to be careful when mixing pantheons, as some may not get on well with others (always do your research!).


This is the traditional view of the trinity, originally designed to depict the journey throughout a woman’s life. However, times are changing, and there have been discussions around whether the whole ‘maiden, mother and crone’ archetypes are positive, or appropriate for these days. For example, I’m on the cusp of the ‘mother’ archetype. However, I have absolutely no desire to have kids (not now, or in the future). I enjoy my career, my pagan studies, going out on ‘adventures’ at the weekend; whilst I would describe myself as a nurturing individual, and protective over those I care about (a bit of a mother hen), that is not my entire identity, and definitely not the best parts of my identity! Whilst some deities do lend themselves well to these personas, many feel that the overall archetypes just aren’t representative of the modern woman’s journey. So, if you want to work with a trinity of deities, feel free to break away from tradition. Choose a badass maiden Goddess with many lovers as opposed to the naive virgin if you wish. Choose the powerful, no-nonsense sorceress as you mother Goddess, and the cunning yet playful woman as your crone. Adapt it to your own path and own it.