Deities For The Kitchen Witch

There are many deities that lend themselves to being suitable for kitchen witch work, and some not so much - you probably don't want to be invoking Ares, the God of war, to bless your cupcakes (unless you are planning to poison your enemies with those cupcakes, but please people - no poisoned cupcakes).


There are several deities which are specifically deities of the home and hearth, and make ideal deities for the kitchen witch.


What Qualities Could A Kitchen Witch Deity Have?


A connection with food:

This seems like an obvious one, but any deity who has a connection with food could be suitable. Maybe they are bakers, or maybe they preside over the harvest? Many kitchen witches like (or at least like to try) to grow their own vegetables and other foodstuffs, which makes harvest deities ideal to work with. Deities to consider are Dionysus, the Greek God of grapes and wine; Priapus, the Greek God of vegetables; Pomona the Roman Goddess of fruit trees, gardens and orchards; Ceres the Roman Goddess of grain; Lugh the Celtic harvest God; Ukemochi no Kam, the Japanese Goddess 'who possesses food'; Hathor, the Egyptian Goddess of Love and Beauty, who is also known as the “Mother of Food”, and “Bringer of Food”.

A connection with family:

Cultivating loving relationships is something that a lot of kitchen witches value. You may not be an extrovert, you may not like people all that much, but those that you do like, you care for deeply. Cooking and baking, offering someone food, is a way of caring for others, sharing that which you have been blessed with, and bonding with people. As such, any deity which espouses the value of family, or of nurturing in general would make a great deity to work with. With the heart and home being so symbolic of family, many of the specific hearth deities are seen as deities associated with family, such as the Roman Goddess Vesta, The Norse Frigg, and the Greek Goddess Hestia.

A connection with nature:

Communing with nature is a common part of kitchen witchcraft. They tend to use natural substitutes wherever possible, such as for cleaning products or medicinally. Many kitchen witches keep indoor plants to bring nature inside and help them feel connecting with natural energies. Deities to consider are the Japanese Konohanasakuya-hime, the blossom-princess and symbol of delicate earthly life; Artio, Gaulish bear Goddess of the wilderness; the Greek Goddess Artemis; the Roman Goddess Pomona, Goddess of fruit trees, gardens and orchards; the Roman Goddess Flora, Goddess of flowers and the spring.

A connection with the arts:

Many kitchen witches like to be self sustaining and enjoy crafting activities, whether that's knitting clothes or tea cozies, painting plant pots or art for their walls, sewing torn clothing to reuse or arranging bouquets of flowers. Deities to look at include The Greek God Aristaeus, of shepherds, cheesemaking, beekeeping, honey, honey-mead, olive growing, oil milling, and medicinal herbs; The Celtic Goddess Brigid; The Roman Goddess Minerva;  The Hindu Goddess Saraswati of knowledge, music, art, wisdom, and learning. 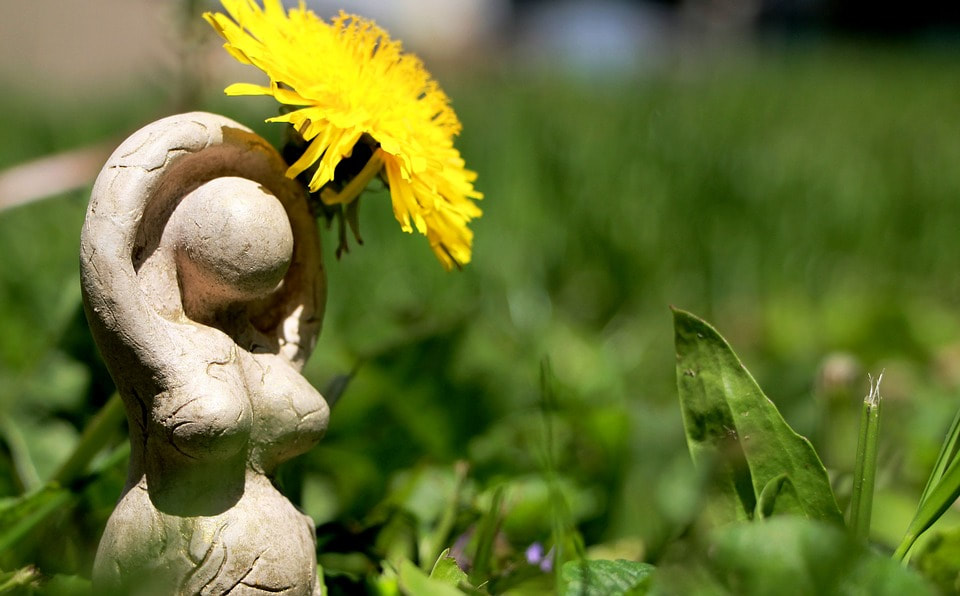 Specific Deities of the Hearth and Home:

There are also specific deities of the hearth and home. The one I work with is the Celtic Goddess Nantosuelta, and have done for several years. She is often depicted holding what looks like a long pole with a small house on top of it, or a pot, or a beehive.  She symbolises the elements of earth, and fire, and also of healing springs. A Goddess of abundance and nature, she works perfectly for me as a Goddess of the hearth and home.


Other deities specifically of the hearth and home include the Roman Goddess Vesta, The Norse Frigg, and the Greek Goddess Hestia.