The Tree Of Life

The Tree of Life, or Sacred Tree, is a common, symbolic aspect of many major religions, not just paganism. In Persian mythology, there was a large Haoma tree known as Gaokerena. The Ancient Egyptians believed in a Sacred Tree, the spheres of the Tree Of Life representing the order, process and method of creation. Passages in writings from the Baha'i Faith give rise to the belief of a Sacred Tree, in Buddhism Buddha attained enlightenment after sitting under a Bo tree, Chinese mythology tells of us a peach tree that can grant immortality - a concept shared by Christianity when you think of the tale of Adam and Eve and the forbidden fruit. You also have the Ancient Georgian Tree of Life Symbol (Borjgali), the Norse Yggdrasil, the Eternal Banyan Tree of Hinduism, the World Tree of Shamanism, And that's just scratching the surface - there are still many religion or belief systems I haven't touched upon with some sort of Sacred or World Tree belief.


In the majority of thee tales, the Tree is seen as a representative of life, of the Universe, as life, death and rebirth, the 'backbone' of all existences. And indeed, that is 'existences', plural, because many of these belief systems subscribe to the idea that this tree contains several spheres, which in turn contain several worlds including our own. 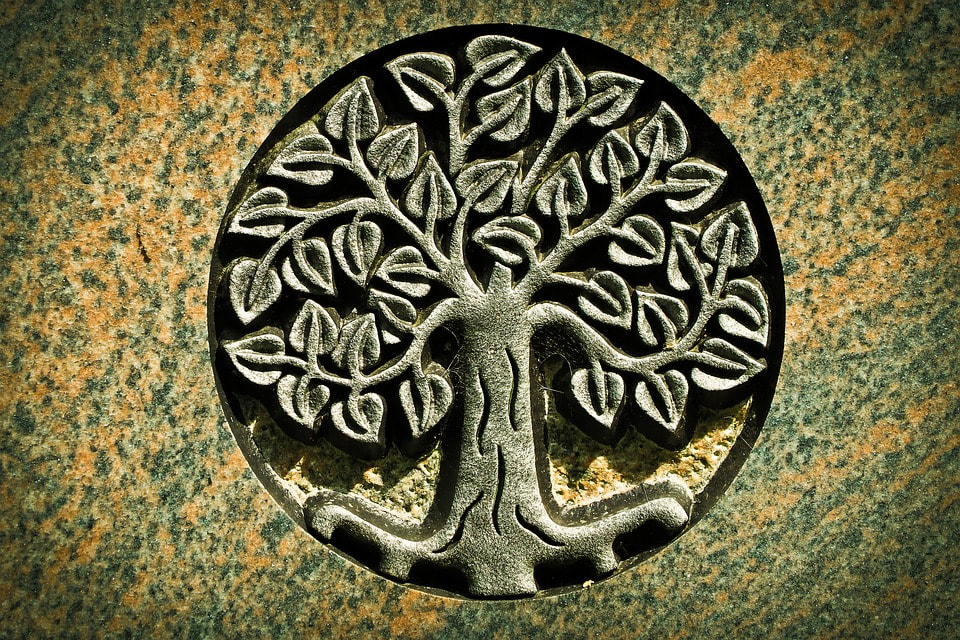 The Tree represents the Universe and is split into three 'zone'; Upper, Middle and Lower Worlds, and the Tree connects these all, and within these zones there are several different spheres, or distinct worlds. The Lower World, in the roots of the tree, is where the spirits of animals, plants, trees and rocks reside, spirit or totem animals, and the realms of the underworld and ancestors. The Middle World, the trunk of the tree, represents our world, the physical and tangible. In this Middle World sector, there also resides what are known as 'hidden folk'; fairies, elves, dwarves, nature spirits and the like who inhabited this world alongside us until we started destroying their environments and habitats and they left for a new 'world'. It is also this Middle World that Shamans can travel around when journeying to help locate that which is lost. Finally, there is the Upper World, in the branches of the tree, where deities and teachers and divine gifts and teachings reside.


There is no definitive list as to which spheres exist and what you will find them, or where exactly on the tree they are. The best thing to do, as always is to experiment yourself. I could talk for ages on the different spheres and the experiences I've had with them, but today I will start with something basic, and that is a meditation to help you find the Tree of Life and sense the Other Worlds. I can be easy at times, especially in such a hectic, modern world, to just 'tune out' and switch off - to know these things exist and are out there, but not to feel them or sense them. And sometimes just being able to sense them can remind us of the magick in the Worlds and our own place within it. It is also a really good meditation to perform if you are new to the concept and practice of the Life Tree and Journeying and want to find your feet.


Sit and begin meditation as you usually do; I still cross-legged, hands resting lightly on my knees, and focus on my breathing. When you feel ready, begin by seeing roots, like tree roots, growing out a d down from your root chakra. See them breaking through the earth, expanding and branching out as they reach further and further down. See them sinking through the earth, past other roots, past the layers of water, stone, insects and burrowing animals and down towards the centre of the earth. See them reach down past the molten lava, penetrating the entire earth and everything encompassed beneath the surface, down through the earth and into the infinite depths of the universe.


Start to draw the power of the earth up through your roots and into your body. Feel the deep and earthy connection, connected with everything in the world, all the spirits of all that exist in these lower realms.


Next, focus on drawing that power up through your body - your 'trunk' - and up towards your head. When you feel ready, start to see branches, like antlers, growing out of the top of your head. Like the roots, see them growing and spreading upwards, up past the tops of the trees, up past the birds, the clouds, the airplanes, up through the atmosphere and right up into space and beyond.


You are connected; you are no longer just a body of flesh on a tiny planet we call earth, but the connector of all that has been, is, and will be, in this universe and beyond. As above, so below. Feel this vastness, and all it encompasses, and you should begin to sense these otherworld's; the divine that rests up high in your branches, the physical realms at your trunk, and the lower world and realms within your roots. It's hard to explain how it feels, but it is an openness, and awareness, you have opened your mind's eye and touched the veil, and as such it thins and you can feel and know all.


It sounds very simple, but can have a profound effect once you really start sensing and understanding these worlds and how the interact. From here, you can start journeying to these other worlds (more on that another time) and exploring the mysteries and secrets the other realms hold.