Garnet is one of my favourites; I love the deep red that shines through in certain lights! However, garnet is one of those stones that I can’t carry around with me constantly; I find it quite ‘heavy’, which I do with certain of dark crystals such as haematite, so usually only for a day or two at a time.


Garnet has a really interesting energy to it; I primarily feel it as a stone of protection against the unknown and any sort of negativity of which you may be unsure of the source of. I also find that with this comes a sense of grounding, a kind of practicality, that then gives me confidence to try something different, or tackle a task I had been avoiding. Feeling this particular kind of protection encourages my curiosity, to want to explore and know I would be completely safe and guarded against anything negative or anything that may cause me fear or anxiety because of it.


I have also found that it heightens my emotions; I’m not a very emotional person, but I do become more aware of them and honest about the effect said have on me overall, which is not something I expected. Garnet is a great stone for inner-reflection.


Garnet is a stone which helps me connect with the darker aspect of the Goddess; I know this is an area that a lot of pagans shy away from, but in my opinion, if you want perfect balance you need to explore and understand the darker elements of your own personality and being. Through meditating on my inner self, with the feeling of protection I get from this crystal, I am more able to accept my negative traits and explore them. 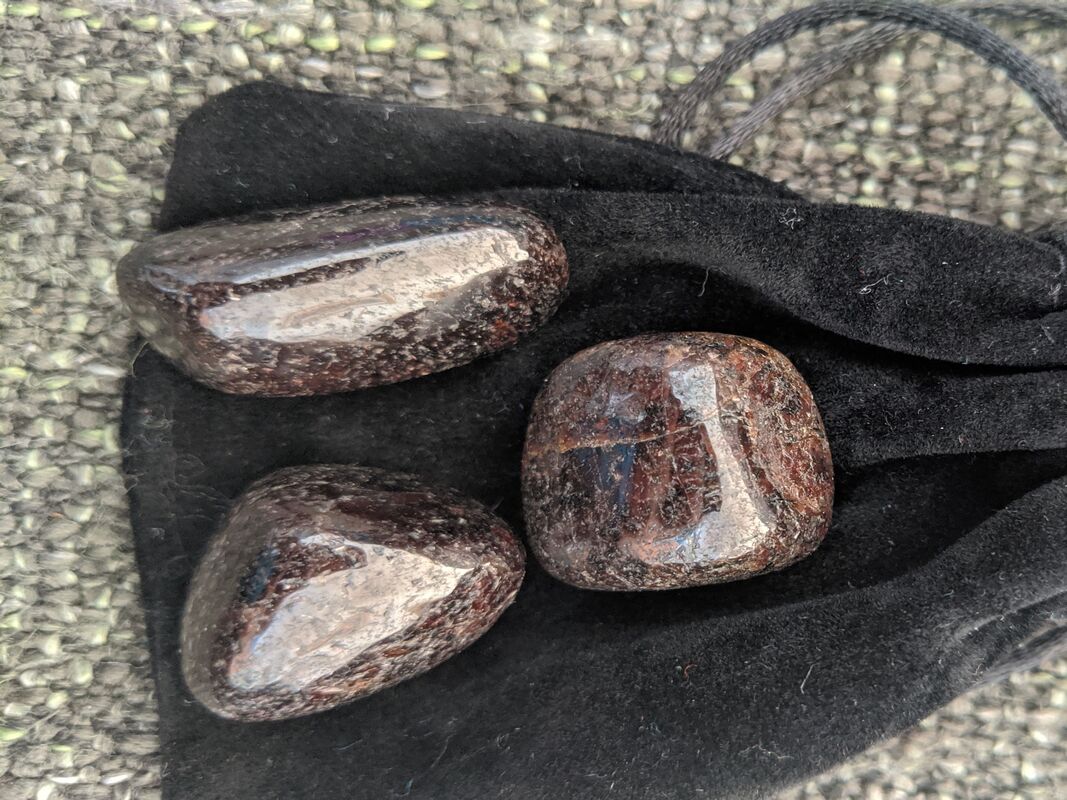 Whenever I use a crystal for the first time, unless I have bought it for a specific purpose, I like to meditate with it first and see what impressions I get, and then do my research and see what properties it is reputed to have. I found this, which seems to be very much in line with the impression of the energies I get from using garnet:


“Garnet sharpens your perceptions of yourself and other people. It dissolves ingrained behaviour patterns that are no longer serving you, and helps you let go of obsolete ideas. Garnet removes inhibitions and taboos, opening up the heart and bestowing self-confidence. [Hall, 136]


Garnet is also known as a Stone of Commitment - to purpose, to others, and to oneself. Its loving powers reflect the attributes of devotion and understanding. It both monitors and adjusts the flow of energy to provide for a balanced energy field around the physical body and alignment of the emotional and intellectual bodies.”


I have to admit, I don’t really feel any ‘loving’ properties off it or any ‘opening of the heart’; I experience more of a lack of fear and the sense of protection which lead me to understanding and balance.


Garnet is also referred to as the ‘Warriors Stone’; having adorned crowns and swords of kings, it was believed that wives sewed garnet gemstones into the cloaks of their warrior husbands to protect them and to help stop blood flow and heal injuries they may sustain in battle. It has even been said that Noah used a lantern made from garnet to help steer his ark safely through the darkness of night. Garnets have been found in artifacts, most notably jewelry, from the ancient Egyptian, Roman and Greek eras.


Garnet is primarily associated with the root chakra, but has also been linked to the crown and the heart chakras, and is said to revitalize, purify and balance all the chakras. Because of its association with the root chakra, it is also a crystal of sexual power, of passion, of stimulating the senses and increasing your vitality and stamina. It is also said to make you more attractive to others by bringing out your best qualities and attract like-minded people, especially in business or when chasing success in your career.


As well as having healing properties in relation to the chakras, garnet also has several physical healing properties. It is said to be good for the circulatory system, the heart, lungs, and blood, balancing blood pressure and detoxing and strengthening blood flow. It can also be used to improve physical energy levels, inflammation, muscle repair and the kidneys. It protects and cleanses one of toxins and came help fight depression and anaemia.


Placing garnet under your pillow is said to ward off bad dreams.


When given as a  gift, it is said to grant loyalty and affection. If you wear garnet and notice  it has lost it’s luster, it is said that there is approaching danger or disaster. And a stolen Garnet is said to bring the thief nothing but bad luck until returned to its rightful owner.


As mentioned already, Garnet is a protective stone and is believed to protect against evil, but it is believed that instead of just protecting the wearer from negativity, it acts by returning that negativity to whoever is sending it your way in the first place.

Garnet is to be used for a gentle spiritual healing. It can heal the blood, heart and lungs. And although Garnet is found in a myriad of colours, it is generally only the red stone that is used for healing.

Garnet is associated with the thyroid and spleen. Both organs may benefit with cleansing and purifying with Garnet when the gemstone is held directly over the organ. Held in the hand or placed atop the head while searching or meditating on past lives can be quite useful in bringing about what is being  sought. Beneficial information for the searcher may be released, although the information may be painful, it will be what the searcher needs.

For women, wearing Garnet through your menstrual cycle will help relieve cramps.

As mentioned, garnet is typically  associated with the first or root chakra, but also with other chakras  depending on its colour, most notably heart and crown. Garnet is a stone that can connect with the kundalini energy of transformation. It can regenerate and transmute, and at the same time lift depression and help keep thoughts on a higher level.

Garnet is a 2nd Anniversary gemstone.