The Celtic ogham is said to be a form of language; in Irish Celtic mythology it is said to have been created by the Celtic God Ogma. It has existed in some form since the 4th century AD, although some believe it originated in the 1st century BC.


It is often called 'the tree alphabet', as many (but not all) of the symbols have been associated with trees, which were sacred to the Irish Celtic peoples. It is worth noting that there are many ogham lists - the tree ogham is just one of them.


The ogham alphabet originally consisted of twenty characters, with an additional five letters being added in later. 'In Lebor Ogaim', also known as 'The Ogam Tracts' or 'The Book of Ogams', an old Irish treaty on the ogham alphabet, also introduces an additional ninety-two characters. However, for the purposes of divination, the original twenty are used.


These twenty-five characters are split into five sections, (or 'aicme') - first, second, third, fourth, and fifth. The first four aicme's contain the symbols which we use in divination. It is worth noting that there is no historical evidence that the Irish Celts definitely used the ogham for divination, but it is generally accepted that the ogham can be used for divination.


The most common use of divination using the ogham is through the use of staves; I have a set of ogham staves, with each stave being made from the tree it symbolises, with the ogham symbol etched into it. You could even make your own set! Or, you could draw the symbols onto stones and use these in the same way you would runes - this is definitely the easier option - take your time and go for a walk, and find some stones to use, or you could even order some crystals online (although if you go down that route, make sure you choose a suitable pen - the first set of runes I tried to make ended up with the symbols rubbed off after not very long at all!).


To perform your reading, place your staves (or stones) into a bag, think of your question, and then pick either one, three, or five stones (depending on the complexity of your question - I personally wouldn't recommend any more than three, but that is just me), and interpret their meanings to give you your answer.


Below is a guide to the different symbols and their meanings, split into their seperate aicme's.


Luis - Rowan Tree - The strength to turn away and dispel negativity, protection, control of your senses, vitality, and healing


Nuin - Ash Tree - Fate, divine process, connection to the world within you and around you, spiritual inspiration, and taking action


Gort - Ivy - Transformation, exploring your own path, career, and education


Ngetal - Reed/Broom/Guelder Rose - Creating order from chaos, harmony, will, action, awareness of the environment that surrounds you


Straif - Blackthorn - Fate, fortune, trials and tribulations which you may encounter on the path to change, liberation, and rebirth


Ruis - Elder Tree - Looking ahead, letting go of that which no longer serves you, change, renewal, career, and health

Ioho - Yew Tree - Reincarnation, death and rebirth, accepting that which you cannot change, new beginnings, connecting with the past

Below are the symbols for the different trees; please ignore the cursor mark next to 'Muin', couldn't get rid of it! 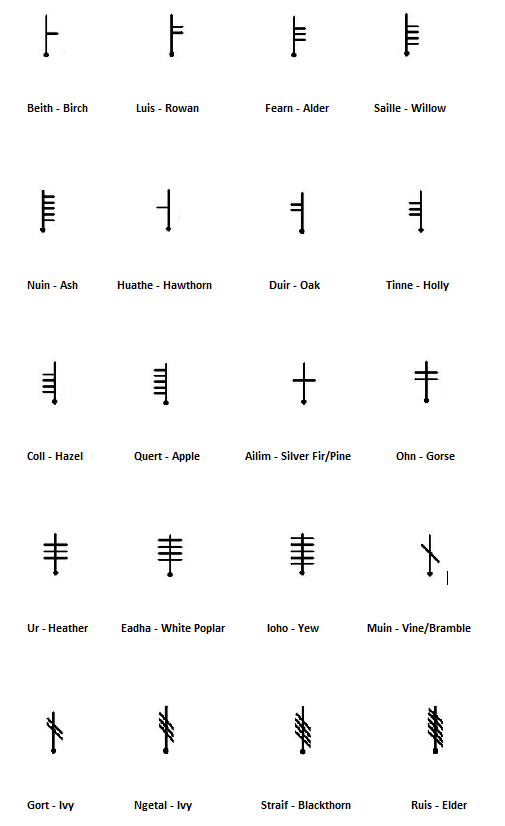