This is a plant found in central Europe, South-West Asia and Algeria and has been cultivated in Northern America and the British Isles, although recently it is becoming more and more difficult to find in Britain. It is a member of the Solanaceae genus of plant. To look at, it has a thick, whitish fleshy root which is about 6 inches long and have a branching formation. It is a perennial plant, with a purplish coloured stem which is described as being annual and herbaceous. It is stout, about 2 to 4 feet high and undivided at the base, but dividing a little above the ground into three (or more rarely two or four) branches, each which again branch freely. Its leaves are a dull, darkish green and uneven in size, often between 3 and 10 inches long. The lower leaves are solitary whilst the upper leaves pair alternately from opposite sides of the stem, one leaf of each pair being larger than the other. They are oval in shape, acute at the apex, entire and attenuated into short petioles. Its black berries resemble cherries, and it flowers in June or July until about September. Its flowers are a dark, purplish colour tinged with green and about an inch long and bell-shaped. It is also known as Deadly Nightshade, Devil's Cherries, Divale, Great Morel, Banewort and Dwayberry. It is believed that its name derives from the Roman or Greek meaning either 'Lady of Death' or 'Beautiful Lady' and some legends also tell of how, on certain nights, the plant would take the form of a beautiful lady to lure men to their deaths.

Belladonna contains an alkaloid (atropine) which is highly toxic, even in small quantities and can be fatal. The root is the most poisonous part of the plant, although no part of it should be ingested. It is said that the poisonous effects may be countered by drinking an emetic, such as large glass of warm vinegar or water and mustard, as soon as possible, but please consult a doctor first if you believe you are suffering from poisoning. 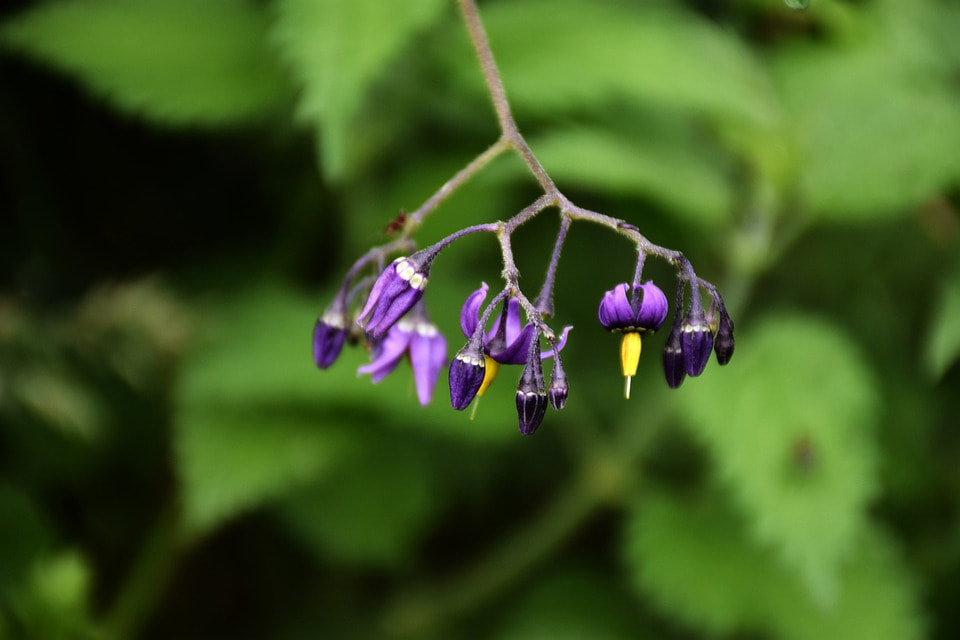 German folklore says that Belladonna belongs to the devil himself and that he tends to it all year long except on Warlpurgisnacht (Beltane) when he is preparing for the witches sabbat. In Scottish folklore it is said that Macbeth poisoned an entire army of Danes by mixing the poison into the liquor that they offered the Danes as a truce. It is also believed that priests who worshipped the Goddess of War, Belladonna, would drink the poison in rituals invoking the aid of this Goddess and has also been linked with the deities Hecate, Circe, Dionysous, Atropos, The Valkyries, Freyja, Odin and Medea.


Atropine can be used medicinally though, and has been used to treat eye diseases and as a natural sedative and narcotic as well as heart, lung and nervous system problems.


Metaphysically, Belladonna has been associated with flying and has long been thought to be an ingredient in a witches 'flying ointment'. It is also associated with hallucinations and psychic exploration, although because of its high toxicity it is recommended against using it at all. It has long been regarded as a 'power plant;' by witches, sorcerers and shamans and used to induce trances. In the past it was also used to aid in divination, visions, and various magicks to do with sleep. A herb of the underworld, it is generally connected with deities of the underworld and can be used to consecrate tools to be used in the contact of underworldly deities, especially tools made of lead or onyx. It can be added to Samhain incense (provided that it is used in open air) to attract the ancient dead to the feast. Other attributes associated with Belladonna are protection, invisibility and love.


It is considered to be a feminine plant, ruled by the planet Saturn when it is in Libra and is associated with the element of water.