Red Tigers eye is a form of Tigers eye, and not a crystal in its own right. The Fibrous Crocidolite mineral is the cause for the shimmering bands of colour around it and the varying colours of Tigers eye depends on the exact nature and amount of the inclusions. The most common colour of Tigers eye is golden/brown, but can also be found as a red or blue stone. Red Tigers eye is formed when during the process of its formation it is exposed to heat, either naturally or artificially. However, whilst the difference in colour does imbue it with its own, distinct qualities, it still shares a lot of common properties with the more usual golden/brown Tigers eye.


Red Tiger’s eye is most commonly associated with the lower chakras; specifically the base chakra, where the heating process it goes through to gain its red colour gives it a stronger resonance to this chakra over other forms of Tigers eye.


One strange thing I noticed when I meditated with Red Tigers eye for the first couple of times was a strong smell of burning; the first time, I stopped and walked all around the house, checking the oven, my hair straighteners, anything which could be causing the burning smell, but there was nothing. And then the second time I meditated with it, I got exactly the same thing. It was very strange, because I’m not the sort who experiences random smells, and also because whilst its red colour does mean it is associated often with the element of fire I don’t feel this; there are other crystals which I associate more closely with the element of fire, and if anything I associate the Red Tigers Eye with the element of earth. 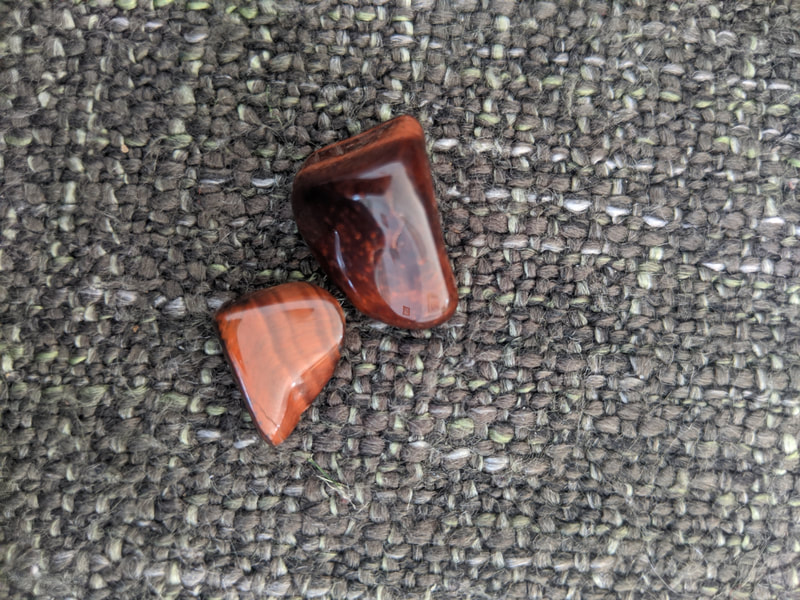 One source I found during my research into this crystal states that it is a survival stone, and can help by guiding you to the correct source of ‘power’ needed to get through difficult times. I very much felt this when meditating with it; it is a very subtle stone but one that has a deep effect. Its two biggest characteristics seem to be grounding and personal integrity and encourages the practicality and willpower to take care of oneself fully. Despite being a grounding stone, it also brings energies of vibrancy and vitality, and the stone itself has a really high vibrancy rate.


In line with its ability to ground and promote ‘survival’, it is also said to greatly help oneself in specifically focusing their energies towards protecting their wealth, money, happiness and peace.


In keeping with the properties of traditional tigers eye-or yellow tigers eye-dragon’s eye can also be used for protection and was traditionally carried around as a talisman against ill wishes and curses that others may send your way and instead attracting luck, wealth and success. Tigers eye in general is said to encourage feelings of self-worth and confidence in our own abilities by helping us to recognize our skills and talents. It can also help us see the difference between what we want and what we actually need.


There was not too much information to be found on red tigers eye, (or dragon’s eye) and tigers eye itself is quite a straight-forward crystal to understand. However, tigers eye was one of my first ever crystals, and I’ve always particularly been drawn to the red version of it and enjoy working with it.